“Sugar coated lips on my cheek and my hands on her blue dress.” As he spoke, the words seemed to be just as sticky as the way he remembered her mouth. He could barely part his lips.
In his right hand a flask held the spit of a nightingale. It had boiled down to just .8 of an ounce before he added the salt of a potato chip from the future–the 21st century to be exact and that whole potion was infused with lilac from her grave.

He looked at it squarely–he had traveled through many decades to get that much nightingale spit–for that spitting bird only lived in Forest Park in Portland, Oregon and even that was a long journey for a time traveler.

In his left hand was a vessel that held a purer substance–the broth from boiling her heart for three years, three months, three days, three hours, three minutes and three seconds.

“It would be my terrible misfortune if this did not bring her back.” He told the darkness of his laboratory, lit only by the lamp above her picture. “But it will work. Soon. Soon she will stand by my side again. And we shall never part.”
He drank a sip of each bottle before combining them in a third flask and pouring the rest of the liquid over her bones. 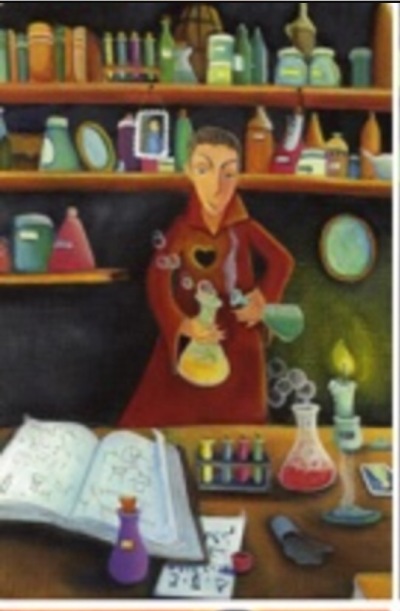 Under the sunshine or in the fog: I am a lover, a writer, an editor, a cook, a humanitarian and a photographer.