The Disconsolate: A Novel 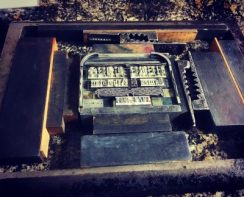 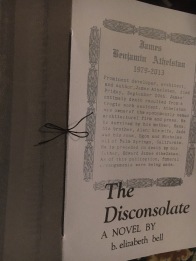 A close up of the cover

Set in the chase

First letterpress project for The Disconsolate: a gravestone bookmark.

Final IPRC project: a cover for my novel and a four chapter excerpt.

The front was letterpressed and the back was laid out in InDesign and printed before letterpress production.

The back panel and synopsis:

Aislin struggles to prepare herself for her former lover’s funeral. She arrives at his mansion to stay with his widow and children. Everyone will soon gather to hear his final wishes.
As she drives up to the house, a strange feeling overcomes her and she senses an energy that is not altogether unfamiliar, full of loss and hope and fear.
The reading of the will is postponed and Aislin is introduced to another world. She knew that the trip would change her, but change is not the same as never again being the same.
Aislin, the disconsolate, was fortified and dangerous and felt she was losing the ability to reason. With purpose, she turned the pages to Paul Hoover’s poem titled ‘Desire’, page four-hundred and eighty-seven, with the pressed rose petals, and all at once, they fell to the concrete. She watched them blow away, over the grey and into the hot sand. Some of them stuck there at an angle, looking like fish fins churning out of the earth. She imagined that the fish had gone into battle with the ants; that neither side could win. Battles could never be won with old rose petals.

Update: The Disconsolate is in the final stages of editing!